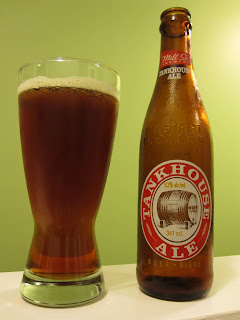 When I first saw this in New Brunswick, I hadn't heard of the Mill Street Brewery before, even though it was the Canadian Brewery of the Year at the '07, '08, and '09 Canadian Brewing Awards. I could only buy this beer in a six-pack, so I decided to go for it. I wasn't disappointed.

It poured much darker than I thought it would be. It has a not-quite-chestnut-brown quality to its amber-red colour. There isn't much head at all, but it does leave traces of it on the glass (lacing) on the way down.

Its subtle smell is a bit sweet and malty, with a bit of burnt caramel.

The taste is about the same, but with a bit of a woody character.

The feel is a little watery, but still fairly smooth.

Overall, definitely a drinkable beer. The only thing that has kept me from trying other Mill Street brews is the amount of other choices at mainland stores and the fact I haven't seen them sold as singles. Had I seen a single of this or this, for example, I would have picked one up!