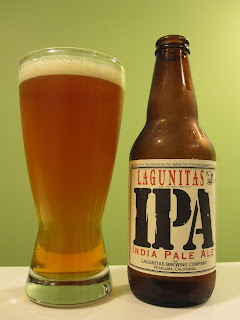 Lagunitas is responsible for uncorking my recent love affair with strong IPA's. As soon as I opened my first Hop Stoopid, I was a changed man. After that was Maximus. Then, after that, was BC's Red Racer IPA, which is at least tied with Hop Stoopid, but may even beat it. Now, I move back to Lagunitas' court, with their plainly-named "IPA".

It looks decent... a nice, rosy/orange colour. It doesn't look as viscous as the ones mentioned above. The head has a bit of creaminess, and soon lowers to a film. Solid lacing.

It smells great! Some grapefruit, and orange rind/peel/pith. A bit flowery.

The taste is good... the evergreen that comes out of other IPA's is replaced with something more floral. The grapefruit is in the taste, too, as is a stronger, bitter orange quality. There's also some grain / malt character in the background.

The mouthfeel's good. It does have some thickness / viscosity / smoothness. The carbonation is there, but not too sharp. The bitterness gets a bit strong by the end. It's bitter & dry, but refreshing.

It's quite drinkable, but I wouldn't want more than a couple at a time. Hop Stoopid, although more bitter, is easier to drink, as is Red Racer (still my two favourite IPA's thus far).
India Pale Ale Lagunitas Brewing Company