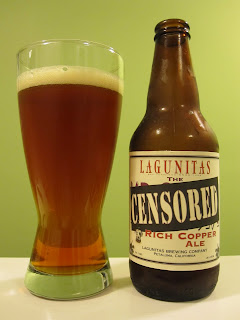 Originally, this beer was known as "The Kronic". The company was forced to abandon the moniker, and re-labelled it "Censored (Rich Copper Ale)". It's a good thing they call this a "rich copper ale", as it's too pale to be called a red, in my opinion. For some reason, I was kind of expecting a darker beer to come out of the bottle, but was reminded by the label that I shouldn't be surprised. There was a fair bit of loose, large sediment at the bottom. I left the last little bit in the bottle, because it just didn't look right to me. There was a bit of head, which reduced to a creamy skim. Lots of lacing.
The smell is like a combo of an IPA, cream ale, and a red ale. Fruity, malty, smooth.
Interesting taste... the IPA smell is misleading. I would definitely put it in the cream / red ale category now. It reminds me a bit of Innis & Gunn and Greene King. It has that sweet red flavour... with the toffee and sugar notes. It has a bit more going on, too... a little earthy.
The feel at first is smooth and creamy, with a bit of a lasting tingle from the carbonation. The finish is a bit dry, and a bitterness kicks in that leans towards the IPA side of things.
A pretty drinkable brew! That odd-looking (and unexpected) sediment threw me off, but this is a good beer.
Lagunitas Brewing Company