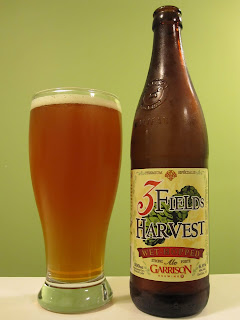 We're all a sucker for limited edition things. Imagine my level of... uh... suckerness when one of my favourite Atlantic breweries announced they were releasing a special brew called "3 Fields Harvest Ale". Imagine my glee when I read it was a beer made with hops from three fields in NS and NB (especially considering my hops / IPA kick these days). Imagine the cool factor of having some of this, the first wet (fresh) - hopped beer to be bottled in Atlantic Canada. Imagine my dismay when I thought of how I had no reason to visit Halifax these days. Imagine my dourness when Garrison announced on Facebook last Friday that they may not have enough to last the weekend, even though it came out less than a month ago. Imagine my my elation when I found out my in-laws would be in Mahone Bay last weekend and would swing through Halifax on the way home to pick some up for me. As Napoleon Dynamite would say, "Yesssss." Who has good in-laws? That's right. I do.

The beer itself is a very clear, bright amber with a reddish tint. There is some sediment in the bottom. The head is small, and fast-dropping, and leaves only sparse lacing. One thing I really appreciated on this one as well, is Garrison's new (at least as far as I know) bottle. As you can see, it's got their logo raised in the glass. Classy.

The smell is good, and distinct. It doesn't have the same combination of many of the pale ales, IPA's, and hop-heavy beers out there now. It has a bit of that resin/sap smell, but the fruit that comes through, I think, is green grapes and apricot (their site says lemon, orange peel, pineapple and lychee).

The taste isn't as strong as the smell. It's understated. Some of what's in the smell is there, but I get more of that orange peel flavour along with it. Any hint of malt is pretty light.

The feel is a bit bitter, but the bitterness fades pretty quickly, which is interesting. It registers more as a taste than feel. I could see some people saying it's a little watery.

Overall, this is a very drinkable beer, as it's not too bitter & is refreshing. Perhaps not as refreshing as some similar brews, but quite good, really. Glad my in-laws got me two. ;)
garrison brewing company harvest ale