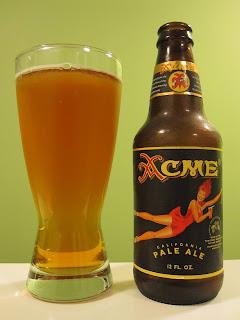 Yet another entry from the North Coast Brewing Company. This is the next of beer kin to the first beer I reviewed on this site...

The colour is right about where I thought it would be; about halfway between an IPA and a generic pale ale. It's pale, but has a cloudy amber-rose appearance... like a translucent apricot. I found the head disappointing. I didn't give it a hard pour, but a very little head was gone before I could turn the camera off. At least its ring of suds left some lacing.

The smell is very subtle. A bit malty... like caramel with some orange peel. It's a nice blend of malt and hops.

The taste kicks it up a bit. It's what you get in the smell, but more pronounced. The flavour turns a bit to a mix of orange and grapefruit... even a hint of cherry, backed up with some malt sweetness / slight fullness.

The mouthfeel is good. The carbonation is just about right, and it's a little viscous like their IPA. It's not overly bitter, dry, or anything else. It's pretty well-balanced.

It's a pretty refreshing ale, and quite good overall. Against other American pale ales, I think it fares pretty well, as compared to the ACME IPA, which doesn't stack up quite as well to its IPA competition.
North Coast Brewing Company pale ale