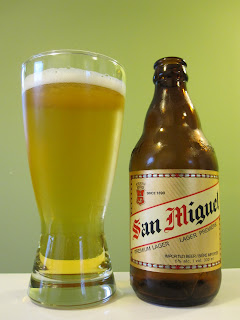 Like some of the beer I get, this one was purchased due not to its quality, but its other traits. This is another one that falls into the category of "I've never had one from there before..." San Miguel Premium Lager is from the Philippines, and, hey... it comes in a stubby!

Pretty much everything about the beer is average.

It has a very bright, clear yellow colour, with a little bit of head that leaves nothing on the sides of the glass.

Its smell is a little fruity, but has that whiff of corn or rice in it, too. Not bad, but a little cheap.

The flavour is pretty much the same as the smell. It has some fruitiness to it, but you get a bit of the cheap rice/corn in the finish.

It has a dry finish, and feels fine in the mouth. Oddly, the alcohol comes out a bit at the end.

It's a pretty refreshing plain lager, but is just fair. No thrilla from Manila.
Lager San Miguel