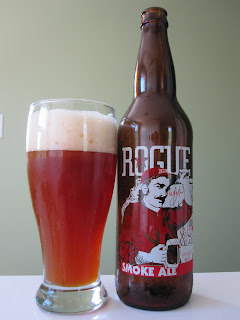 There are so many different styles and categories of beer out there. Today's test is of Rogue Brewery's Smoke Ale, my first foray into this fare.

It has a great, bright, smokey-red colour. The first pour yielded next to no head. The next one provided lots of foamy head. It sank rather quickly. Also, at the end of the bottle was some dark yeast, which I didn't expect, making the beer cloudier than at first. I would have swirled it around first, had I noticed.

The smell was so reminiscent of something I knew but couldn't place... I think, what it was, was a cold bean salad I've had at family things a couple of times. You can smell the smoke, but there was something meaty/beany in there, too. Also a bit of caramel and toffee.

The flavour? It's like I drank a drenched campfire... with a bit of caramel. Not bad, but a bit much, perhaps. A smaller bottle would have been better. I still got that bean note in the flavour, as well as the smoke. The smoke comes out in the taste, and really comes out in the aftertaste / exhale. The exhale smells like a campfire that had just been put out.

The feel of it was well-balanced, overall. For me, it seemed to work up a bit of solid spit (gross as it sounds, I know) in the mouth... leaving the mouth a bit dry, even though finish isn't really dry.

This was my first smoked beer, and it was alright. I would like a smaller amount of it to actually have with some BBQ or some campfire goodies. I think it would work even better there. Next time: find one in a smaller bottle size.
Rogue Brewery Smoke Ale