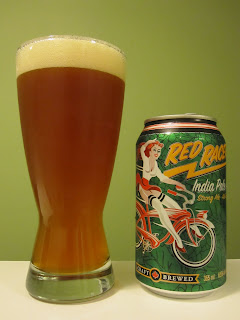 Although I plan on doing regular reviews on Fridays, I couldn't wait to get started now that things are rolling. To start us off well, I give you what is one of the best beers I have ever had: from British Columbia, Central City Brewing Company's Red Racer India Pale Ale.

IPA is a beer style that was originally created to survive the long boat trip from England to India during British colonization. Check the beer styles info on the right to learn more about the style. IPA's have become just about my favourite style of late, due to this and another beer to be reviewed later. It's nothing like what many of you may know, Keith's IPA. That's because Keith's IPA is nothing like an IPA. And, frankly, let me just throw down the gauntlet now... although I have drank a lot of Keith's in my time... it's bland stuff (sorry, Tim!) compared to a beer like this.

It has a great cloudy appearance. It's nearly apple jelly-like in colour... kind of a mix of pumpkin, honey, and amber. The head is foamy and creamy, and leaves lots of lacing (or trails of head on the glass), right from the very rim of the glass to the very bottom.

The smell is incredible. I didn't expect such scents from this little can. It's very hoppy / floral / fruity (like an IPA should be). Its smell is very reminiscent of Hop Stoopid.

This could be the best beer I've ever had from a can. It tastes very much like it smells... some juniper / pine, grapefruit, and a bit of lemon. There is a slight pepper (or spice/grain) taste in its bitter finish.

It feels great, too. There's an airiness on the exhale... the back of your throat opens up. The carbonation is just right, and not sharp when held in the mouth. Its body is a medium one that is both smooth and quenching.