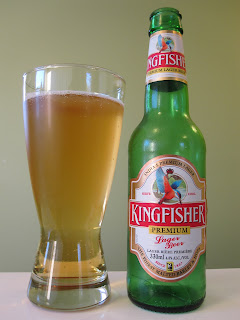 Kingfisher was one of those beers that I knew wasn't well-regarded, but had to try since I had never had one from its country of origin before: India.

It is a very pale and clear lager, with a little bubbly head (no substance at all) that vanishes quickly, leaving no trace.

The smell? Well... the first one I had in March had me saying "holy green-bottle skunk!" By chance, I had another one last night, and it wasn't quite so pungent. Aside from that standard green-bottle smell, there is something decent to it, though... almost like an amber hidden in there. Perhaps some hops that push through.

The taste is better than the smell (thank goodness). There is something nice or fresh in the nose / after-swallow. Still, it's a pretty run-of-the-mill lager. Not bad, but nothing great. It'd be fine on a hot day, in the shade of the sun.

As for how it feels, it's pretty average. Not too fizzy.

It is drinkable, but after drinking one, you might be thinking that Commonwealth Games preparation isn't the only thing people in India can't get quite right.
Kingfisher Lager