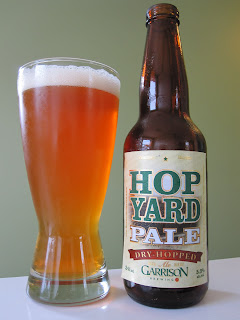 In case you didn't know, no trip to Halifax is complete without at least a quick swing by the Garrison Brewing Company, down by the waterfront. They make some pretty good beers (some better than others, of course), plus, buying at the brewery is a little cheaper than other places (selection is better, too).

Today's review is their Hop Yard Pale Dry-Hopped Ale. A dry-hopped ale is a little different in that the hops are added after the beer is done cooking. It's supposed to add more flavour and aroma, without the bitterness.

As you can see, it has a foggy amber / honey colour, with a finger or two of fast-dropping head. There is a bit of light lacing as it goes down.

I expected some tropical smells, given the style, but it was a little nicer than I thought it would be. For whatever reason, I thought that west-coast IPA's would have the beat on this. This competes fairly well. It has a fresh smell of grapefruit, papaya, and mandarin oranges.

The taste isn't quite as good as the smell. It's got the bitterness of other favourite hop-strong beers (which is surprising, being dry-hopped), and the feel, but not quite the taste. It's more subtle. As soon as you sip, you get the nice flavours from the smell, but they're gone with the gulp, just leaving the bitter aftertaste. As an American pale ale, I was expecting a little more of that malt flavour. I think the Acme California IPA I just had had more of that character than this.

The mouthfeel is pretty good. Smooth, a little viscous, with a dry, bitter finish. I could lose a bit of the bitterness since the flavour fades somewhat.

A very drinkable beer. It's nice to see a good hop-strong beer brewed locally. I may even like this one more than their Imperial IPA (I'll have to have another to be sure).