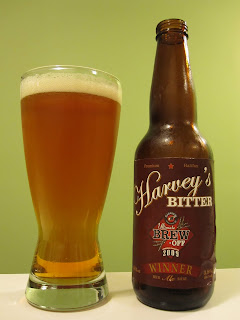 This is another Garrison Brewery offering I picked up in Halifax this summer. I picked it up partly because I generally like Garrison's stuff and I hadn't seen this before, as well as partly because my wife's uncle's name is Harvey (who isn't bitter... he's a Blackhawks fan, not a Leafs fan).

This is the winning beer from Garrison's 2009 Ultimate Brew-off competition.

The beer pours a nice amber colour, with some copper / red. It doesn't have much head, but leaves tons of lacing on the way down. It's clear, and pretty bubbly.

In the smell is a bit of hops as well as a bit of toffee.

The taste is nice, and kind of hard to peg, exactly. It has some woody / earthy notes, with some toffee or caramel, and maybe hint of orange from the hops. It reminds me a bit of beers like Innis & Gunn, Doom Bar, and Greene King IPA.

The mouthfeel is nice and changes as you drink. At first, I found the carbonation a little strong, but by the end of the glass, it had pretty much fizzled out to that of a flat draught. It's a little watery, but smooth. The bitterness is definitely there, but it's not too strong.

Overall, especially for a beer with only 3.8% alcohol, it's a nice little quirky beer. Fresh and yet complex enough to keep it interesting.