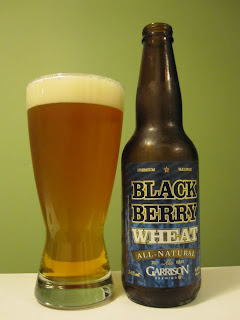 Overall, I'm not a fan of fruit beers. The first one or two I had were way too sweet, and I was turned off from the style a bit. However, when I saw this at the Garrison brewery this past summer, I thought I would give it a try. I figured they might do a nice job of it.

The head was nice and foamy, yet dropped pretty quickly. At least there was lots of lacing. The colour was a deep gold, with a hint of orange.

There was a fairly sweet smell of berry; not overpowering, but it's about all I got from it.

Flavour-wise, this one wasn't too bad. It was a little too sweet for me, and almost a little soapy, due to a bitter finish I found kind of surprising.

The carbonation was OK, but it was a little thin/watery and a bit bitter (I don't think fruit beers should really be bitter at all, especially when they're pretty sweet).

The drinkability is OK, but I wouldn't want more than one or two. There are other much better fruit beers around. I'd start with St. Ambroise's Apricot Ale or Fruli.
garrison brewing company