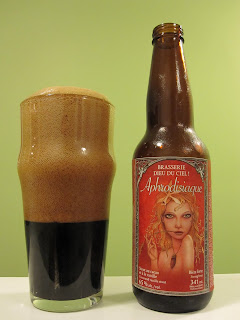 Dieu Du Ciel (Sky God) is a Québec brewery that just celebrated their 12th anniversary two days ago. This is only the second beer of theirs I've had, but they sure seem to make some good and interesting things.

Aphrodisiaque pours like less viscous molasses, but looks just as dark and thick. The head is massive! It couldn't be poured all at once, not by a long shot. It's very thick and creamy on top, and more bubbly underneath. It lasts forever, with peaks, lumps, holes, and gaps forming in it along the way. It laces pretty well on the way down.

The smell is like sharp dark chocolate with that alcoholic vanilla. Some rye bread & molasses is also there.

At first, I taste more coffee than anything else. It has the flavour of chocolate-covered espresso beans. It reminds me a bit of Old Rasputin, or stronger beers, without as much alcohol. The vanilla and bourbon flavours in it give the illusion of a higher abv, though.

It's a little more watery than the appearance would lead you to believe. The finish is a little chewy, and not very dry.