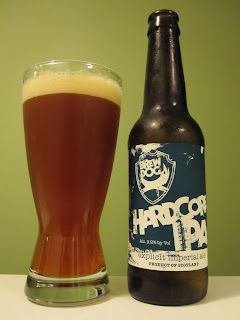 BrewDog is a Scottish brewery, run by some younger gents who are looking to make quality, interesting beers. They always seem to be doing something new or pushing limits.

This IPA of theirs is 9.2% (assuming this is what they think makes it hardcore?) abv, or alcohol by volume. It pours a medium, reddish amber. The head starts off fairly creamy and lowers somewhat quickly. It keeps about a 2mm layer of head on top, though, with only light / sparse lacing.

It gives the usual family of hop scents: evergreen, florals, and citrus (grapefruit especially). My wife said she smelled strawberries in it. The smell is a bit more subdued than other IPA's like Hop Stoopid or Red Racer IPA.

The taste is similar to the aroma: evergreen, florals (wild Alberta roses, I think), the citrus I mentioned, as well as a bit of a light malt flavour... which makes me think it has a bit of an amber ale / Irish red quality.

I didn't find it as bitter or as refreshing as the other beers I mentioned above. The 9.2% is hidden well, but does come out a bit near the end of the bottle. I think that's what gives it a slight sharpness, which is mostly masked by other things going on. The aftertaste rests mainly in the middle of the back of the tongue rather than the sides.

Overall, it's pretty drinkable. If I was looking for a refreshing IPA, I'd pick something else. If I was looking for a good, average IPA to have at a pub or some such place... for something a little warmer, I may go with this. It might make a good beer for those who want to start exploring real IPA's, due to its familiar malt / amber / red traits... since some people give me looks of shock when I try to explain how great IPA traits are (flowers, citrus, evergreen). Plus, perhaps its 9.2% and "Hardcore" name may make it seem more beer-like and manly.