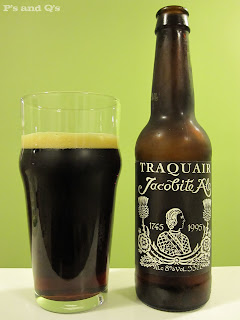 Scotland's oldest inhabited house, Traquair House, which dates back to 1107, it was "originally a hunting lodge for the kings and queens of Scotland. Later a refuge for Catholic priests in times of terror the Stuarts of Traquair supported Mary Queen of Scots and the Jacobite cause without counting the cost." This beer, Jacobite Ale, is one of the ales brewed at the house. The beer's profile at their site says the beer was first brewed in 1995 to celebrate the 250th anniversary of the Jacobite rebellion. It is based on a recipe from the 1700's, and spiced with coriander.

The beer poured with a finger of creamy-looking head that reduced to a solid ring with some patches in the middle. It's quite dark... all brown earth, with very little red to it. Lacing is sparse / light.

The smell is interesting. I haven't had too many like this before. It's got some hops to it, but the malt comes through more (just like in the taste). You can pick out alcohol (something like bourbon, maybe), earthiness, dark molasses, dark chocolate, and maybe cherries.

In the taste is hop flavours like cherry & berries, but it's mostly malt flavours that come through... rich, sweet, earthy flavours. Peat. Scotch. Molasses. Dark, bitter chocolate. Nothing jumps out at you - it's all balanced evenly, and not too rich. In some ways, I would prefer them to be a little richer.

Like with many dark ales, I expect something rich and meaty, feel-wise. This one, in terms of feel, is pretty medium all-round. Its carbonation is light to medium, and beer is medium as well, verging on watery. It's a bit of a detraction in some ways... I want something strong and thick to sip on. Then again, its easy-going (down) nature makes it a very drinkable beer.